Getting moire pattern in scans

Very nice ZincRider.
I remember I had troubles with the descreen plugin as well when I first installed it, but it's been so long I don't remember what it was. I know you want to make sure there is no alpha channel in the image.
The best thing about it is being able to try different values quickly and easily without the manual work. 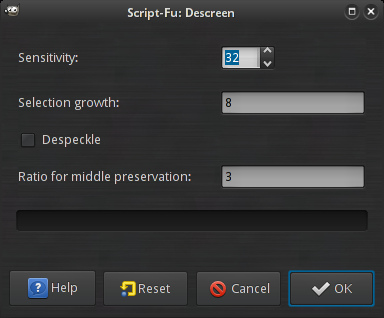 Are you getting errors or nothing at all?
My body may be aging rapidly, but my mind is still tarp as a shack!
Getting Started
Navigating Fanart.tv
How Fanart.tv Works
Why Your Image May be Denied
Moderation Time
Unwritten Rules
Top

Ha! I just got it working using a Gimp build from http://www.partha.com/, which comes with the FFT plugin. For some reason the one I installed manually never showed up in the menu.

The script is pretty neat.. It does the Fourier transformation much faster than G'MIC, which is a huge plus for me. Also gives me better control over parameters.
Not sure if despeckle is doing anything, though.
Top

Akovia,
Would it be possible for you to make the cleanup video available again, the link on the previous posts returns a 404 error. I just purchased a new Epson Perfection V600 scanner and I am having a terrible time trying to remove the moire patterns from the scanned images. I have read and tried several techniques but I am not having much success. Any hints/suggestions would be appreciated.

You should get useable (but blurrier than necessary) results with the descreening option your scanning software offers. Make sure to set it to "fine prints" and turn off the sharpening option.

Maybe you could post a scan and we could all try and descreen it using our preferred techniques, so you can see the potential of your image...
Top

I have attached a few images as you suggested. They were all scanned using the Epson Scan software, 24-bit color image, 600 DPI, De-Screening set to Fine Prints and Unsharp Mask turned off.


Reading articles on the Internet can be very confusing on this topic. For example, you recommended turning on the software's de-screen function, however, many articles suggest not using the scanner software for this function and de-screening using software such as Gimp or Photoshop. Is one method better than the other? Should I be looking at other scanning software?

The method your scan software uses (scanning at a higher resolution, adding blur and then scaling down) has its shortcomings, but it's very easy to use. Descreening using a fourier transformation can give much better results, but it's also a lot harder to get right.

In case of the cover, your scan software didn't use quite enough blur (the "magazine" setting might have been better for this particular cover), as some elements of the image have a bit of halftone and moire patterns - not a bad case, though; this is a nice scan and the print was of rather good quality as well. And of course you had unsharpen mask turned off, so the patterns weren't exaggerated. This leaves us a nice source image to work with.

Usually I'd pick just one method of descreening, but in this case we could simply add another one on top.

I had to descreen this one in two steps.
At first I let the descreen script for GIMP run with the following settings:

Unfortunately this left me with some halftone and moire patterns on the faces of the people in the foreground.
I performed another fourier transformation and saw that with the script settings I had chosen, the innermost circle of stars couldn't be removed. I greyed them out manually and did an inverse fourier transformation. Now the patterns were gone, but I had strong artifacts around the titles and logo in the upper part of the image. Quite a bummer.

Then I exported the image and reversed my manual tweaks. Now I had a version with clean text and logo and a pattern in the foreground and one with no pattern, but messed up text. I used the best parts of each image to compose this:

There are artifacts along the top edge, but they should be easy to touch up.
Top

Thanks for the great work on that poster, very much appreciated. What I am really trying to understand is the process so that I can do the work myself, I have many posters and discs that I am looking to scan. I tried FFT and the de screen plugin on the DVDs and wound up with grey images, after FFT inverse or the completion of the descreen plugin. They don't seem to have the star field that is talked about with FFT.

Are the any general guidelines or tutorials on how to approach removing the moire and half tone patterns? Would disc scans be handled differently than other art work?

Are you using the GIMP plugins or something for Photoshop?

I'm using the FFT plugin and descreen script for GIMP and they work fine for color images. G'MIC's fourier transformation also works, but it's much slower.
I know at least one FFT plugin for Photoshop requires an extra step for colour images. This tutorial will tell you how to do it: http://www.3d4x.ch/Swift%27s-Reality/FF ... okov/16,35

If you're on Photoshop, have you tried the plugin provided by http://www.descreen.net ? Looks rather well thought out and powerful.

Discs and other artwork are handled the same - but I gotta say, that Eddie Izzard disc is quite a pain to descreen. I'm getting better (but not good) results with some smoothing filters..
Top

I am using Gimp. Sorry, thought I had stated that.
Top